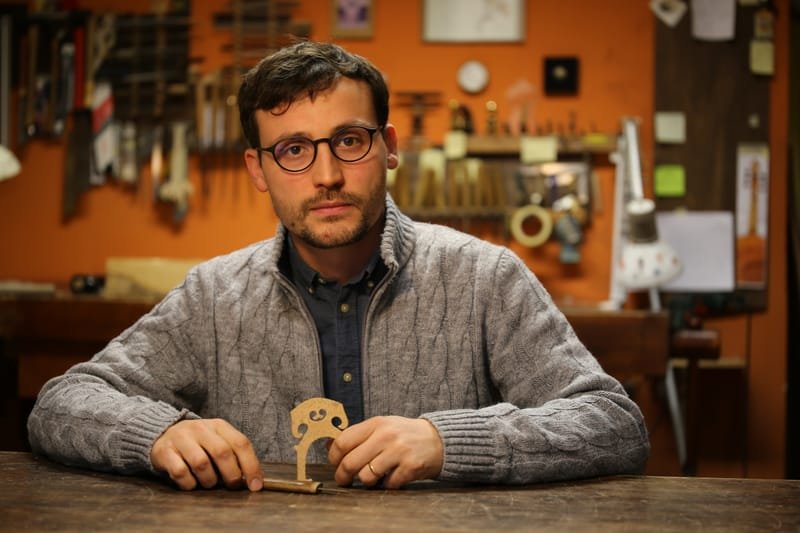 In 2001 Luca left the famous Italian Prosecco Hills of Valdobbiadene to pursue his passion of violin making in Cremona, the International Capital of Violin making in Italy, whereby Luca attended the prestigious violin making school “A.Stradivari” Cremona, graduating in 2006.
Whilst mastering the art of lutherie at A.Stradivari, Luca enriched and developed his violin making skills and expertise by working with a variety of excellent violinmakers in the town. Following a successful internship, Luca began working for the highly acclaimed Carlson & Neumann Cremona, a renowned workshop for the conservation and restoration of historical instruments. This collaboration lasted 12 years. Through studying the masterpieces of traditional Italian and international violin making, Luca perfected his construction skills, whilst also learning essential techniques of restoration and maintenance.

Luca received a Special Mention for a viola he made with Master Klaus Berntsen in the Pisogne Contest 2010 and an Honourable Mention at the XIII edition of the Concorso Triennale degli Strumenti ad Arco “Antonio Stradivari”.

In the academic year 2016 – 2017, Luca’s violin making mastery led him to be a professor in Restoration for the senior class of the International Violin Making School of Cremona and for the third-year class of the Restoration Course at the Professional School “Cr. Forma” in Cremona

In 2013 Luca proudly opened his own violin making workshop in Cremona with another Master Luthier and Bow maker Tetsu Suzuki and became a member of the Consorzio Liutai e Archettai “A.Stradivari” of Cremona.

In 2017 luca embarked on a university career by enrolling in the Master's Degree Course in Conservation and Restoration of Cultural Heritage (class LMR / 02) qualifying for the profession of restorer of cultural heritage, lasting five years.